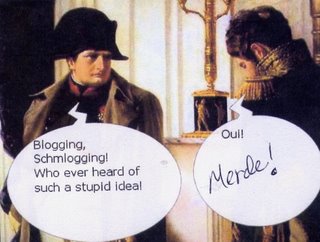 Class listen up...I'm going to share something with you I don't tell very many, but you need to understand why I preach blogging with such evangelical fervor. I saw it coming...the blogosphere, that is! This vision of the blogosphere came during my lifetime in France.

Back in the day of Napoleon...you do remember him right? I (yes, your very own delicious Blog-Blond) was one of his brilliant advisors, mostly imparting information to him through pillow talk. However, when he was away on one of his many campaigns to conquer the world, I often sent my staff to convey my inspired ideas, dreams, downloads, gossip, need for more francs, etc. Since I was then (and still am now) a time-traveler, I foresaw this much easier way for people to communicate with each other besides quills, messengers, spies on horses and what not. I foresaw the blogosphere in all its glory! So I immediately dispatched my trusted aide with this important news to Napoleon's grody encampment.

Alas, as you can see from the above depiction of this historic event, Napoleon just didn't get it! He may have been good between the sheets (although he was a little man, he wasn't little down there if you catch my drift), but he was kinda deficient in the brain cell department, ya know? Some of my most brilliant ideas he never grasped. So I wasn't really too shocked when he blew it all and was sent away. By then I had already buddied up with another head honcho (who happened to reincarnate as Oleg Cassini in this lifetime), so my ass wasn't grass like his. I met and had another affair with Napoleon once again in this lifetime, and sad to say, he still doesn't get it, although he has been successful acquiring fame, fortune, expensive homes, lots of beautiful damsels...and notoriety.

Don't make me have to tell YOU my adorable students: "I told you so". It's wearisome to keep repeating myself lifetime after lifetime. As a muse, I've had enough of Groundhog Day, as in the movie version...you know, it's even hard for me to watch that movie because of the boring nitwit that took so long to get with the program.

Check out the beginning of my new Media Center on your way out once you've done the obligatory tipping for your brilliant teacher. See how she's making the news and what goodies and perks she gets from blogging. Maybe this will inspire you!

READ MY LIPS
I Think...Therefore I'm Single
In & Out, Up & Down, Over & Out
Missed me, didn't ya?
From the students with a million alibis
Thank Goddess It's Friday
Babe Blogette Wear
Apples are NOT ORANGES
Yes, Size DOES Matter!
Training Wheels