Blogs: Truth or Dare To Bare? 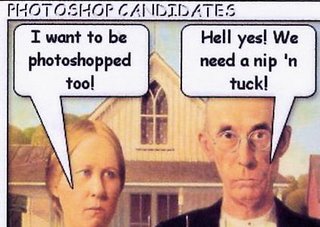 Class: I realize most of you aren't home hanging out with your computer, and it's just as well as I won't have to put up with your noise, even from afar! I have decided to post one last post on this holiday Labor Day weekend. Not that I have to inform you, but I am doing so because I am your teacher after all. I will be breaking from blogging for the next three weeks or so...unless I feel that itch to keep you in line and take a spike heeled shoe to your back. To spell it out for ya'll: I'm taking a vacation! Yooo-hoooo!

However, before I take off in the private jet sent to pick me up by dear Elton, I wanted to leave my beloved students with a lot of homework. Why? Because you deserve it! You've been very naughty. I know! I see all, remember? I will save the spanking for when I return--just so you have something to look forward to. I want to share with you today what has been amusing me. In case you haven't heard, the following stories are a laugh riot.

First, the media controversy over photoshopping with Rosie O'Donnell and Katie Couric is a howler. Rosie and Katie's respective before and after photos clearly show there was some 'work' done, and Rosie is not pretending it didn't happen. She's honest. Obviously, some of the big network honchos want Rosie and Katie sized down and shaped up. Why? The image wars of course! Everyone in the public eye must look hot to sell product, and thus it was that I emailed another famous couple and inquired what they thought of this photoshopping madness. I was shocked to read they are all for it! I posted the photo of their comments above, and truthfully, I can't say I blame them. They have been taking the heat for so many years! Poor dears! It's a bitch being famous!

Second, the story posted by Bloggers Blog
rocks my boat! Here's the story in a nutshell: dear Lee Siegel gets sacked for praising his own blog. Now tell me, how many of us haven't done this? Confess! However, we are mere peons, and we aren't employed by the la-ti-da New Republic, so we get away with all our faked praising comments. What slays me is the nom de plum Lee Siegel gave himself: sprezzatura! What is this name all about? He could have signed as anonymous, but NO, he had to be outrageous! I'm sure there's a story there, a juicy one. I will keep my eyes and ears peeled for more of this hilarity. And the new terminology is so ridiculous: blogofascism! When is the nuttiness of the blog world going to stop? I can't pee in any more leather britches...they're so expensive, and ya'll aren't the most generous of tippers lately. 'Nuf said...I promised my therapist I wouldn't go there anymore.

Gossip is over, and now your homework: The Daily SEO Blog
This document prints out to fourteen pages including comments which we aren't sure are real or not anymore, are we? Who really cares anyway, right? This informative post is titled "21 Tactics to Increase Blog Traffic". Study this and put their ideas into action. I plan to. For instance, their tip for Number Three is: Write Title Tags with Two Audiences in Mind. I know exactly who visits this blog because of Uncle Vinnie's staff. There are these: studious blogging dummies, nerds, famous s & m's (no names!), thrill seekers, depressed people who seriously need a laugh, and the alphabet soup gangs.

And Number Six fits right in with the theme of this post, does it not? The suggestion is to "Launch without Comments (and Add Them Later). Sure, add them when you're ripped, and a crazy-a** name comes to you like "sprezzatura"...then sneak over to your friend's computer and write glowing reviews about your blog and diss other blogs, especially enemy blogs at the same time. Then carefully wipe down the computer keys or better yet, blow up the computer Mission Impossible style or do something, anything so there is no trail that it was YOU WRITING THE COMMENTS. Yup, this is how it's done in the Big City students. Once again, I stress to you: don't always believe everything you read or hear. Just sometimes. And don't get caught. Ya hear! Unless you want more spankings.

Toodles for the next stretch of time. I know you're gonna miss me, and who knows, I might even miss you too! I might pop in with a quickie or two from the road. Be well, study and prepare for the spanking you so much deserve.

Which Blog-reality Have We Stepped Into?
Sweeter and Even Shorter
Short & Sweet
Bloggers Create Mistaken Identities
Blog-alicious
I Present to You Our Illustrious Guest Blogger Sco...
Poll Day
Golden Apples of Blogdom
Blond Plays Hardball
The Wonders of The Blogosphere