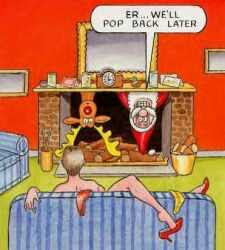 You remember last year when we cuddled up in bed on this blog, and I shared some of your gnarliest secrets with my readers and we had a jolly good laugh? And you told me at that time that I could have ANYTHING I wanted...remember? Well, here is my Christmas wish list, and I expect you to deliver on time.

Since the story goes that you see everything and know everything, I guess you already know that I've been BOTH naughty 'n nice. But here's the way I look at it: this concept of n & n is a relative one. Sometimes being naughty is REALLY nice if you know what I mean jellybean.

For example, if someone pokes me, am I expected to Super Poke them back? Or am I merely supposed to be a tease and throw some weird thing at them? A rule book would be so helpful.

While you're at it, would you have your elves clean up my Facebook and make all those annoying invitations and people I don't even know who want to be my friend disappear? Maybe I'd start liking Facebook again if I wasn't so besieged!

2. Handcuffs For My Muse

Last year my muse ran off with the pool boy to do aya in Brazil, and I was p.o'd! How could I write these posts without my Muse? I finally tracked her down, and she was like totally out of it and hanging out with a 4-th dimensional green lizard which I had to slay to get her back, and now that I've got her back, I want to make sure she stays with me so I can write funny again.

Thus, a pair of cute, 24- carat -gold chain handcuffs to keep her with me is an absolute necessity. That seductive green lizard is so beguiling and strong I don't wanna have to battle with it again! My Jimmy Choo black silk thigh-high boots aren't looking so good after all that lizard s***-kicking! Throw some of those in under the tree too!

Santa dahling....as you well know, those who are jealous of the success of Blog-Blond managed to put a major crimp in my posting the second part of this year!

First, the jealous ones lured my Muse away through the artifice of a hunky pool boy who read my Muse Oscar Wilde fairy tales by candlelight, and then they whammied me by stealing my energy and putting me in the godawful hospital! I know they'll get their comeuppance because what goes around is a sure thing--a Law of the Universe.

But in the meantime, I want Mega Energy so that I can post on ALL my blogs at least three times a week AND have enough energy left over to play extra naughty. After all, I've got to catch up for lost time and FUN!

Yes, you read that right! Since all those television writer's are still striking and Hollywood won't be producing any segments of all the popular sitcom's for who knows how long and since the Hollywood producers/sharks are desperately searching for product to put on the air with tawdry reality shows, I think Blog-Blond should become the hot new Reality Show.

I won't give away the details in this post, but I have great ideas, and so if you're reading this and you're one of those desperate Hollywood producers/sharks, call me and we'll have lunch. If you throw enough moolah my way, I'll give you the pitch.

The Blond Lives To Tell The Tale!
My Meeting With St. Paul
Heard It Through The Blogvine--Is Big Brother OnT...
That's How I Roll
Blog World Expo Contest
Even MORE Ways To Make Fellow Bloggers Hate You
Blog Against Abuse Day--Humor Bloggers
Back From Rehab and Checking Back Into The Blogosp...
The Blog Rehab Bust-Out Post
Blog Day Blogging