Class, after I finished reading the masterful post by Brian Clark of Copyblogger with the summation of his blog over the past year titled "The Best of Copyblogger in 2007", I asked myself some HARD questions.

What has Blog-Blond blog achieved? How has Blog-Blond evolved? Am I becoming a better blogger or just a kinkier, lazier one? Where have I been with my blog, and more importantly--where am I going?

I decided to whittle down the results in a series of pictures for the Main Stages of Blog-Blond. You will easily see how Blog-Blond has evolved-- since pictures speak louder than words.

The first picture is a drawing by your very own blondalicious teacher as she was learning the art of blogging. She was obsessed, consumed, and more than a little bit crazy as her pea brain was challenged by all the new blog lingo and technology. The blogosphere was daunting to your teacher in the First Stage! 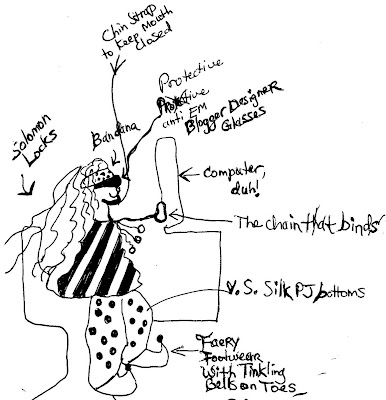 The second photo depicts the stage of Blog-Blond's evolvement when she became the tough-as-nails taskmaster.... with perhaps more of an s & m edge if the truth were to be told. 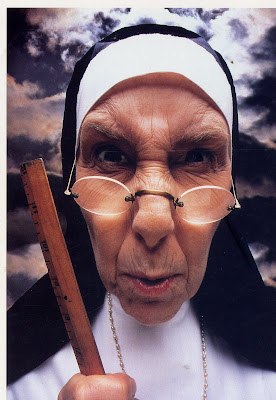 The third drawing represents the darker, sexier stage of B-B because of the many trials and tribulations!! Blogging is lots of hard work!

And finally, where do I project Blog-Blond going in 2008? Since I've been fielding reality show offers, book deals, and a sh**** movie here and there, I figure I might as well be the first women blogger to go on the cover of Maxim magazine. Why not?! It'll be ground breaking! I rather like this style on the cover of Maxim, but of course, I'd have to add my thigh-high black silk stiletto boots! 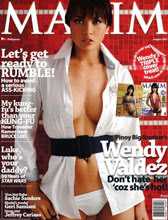 What do you think about this idea, Mr. "Humor-Blogs.com"?

Blog-Blond Comes A-Calling On Christmas
The Three Biggest Blog Lessons I Learned In 2007
Dear Santa--Here's My List!
The Blond Lives To Tell The Tale!
My Meeting With St. Paul
Heard It Through The Blogvine--Is Big Brother OnT...
That's How I Roll
Blog World Expo Contest
Even MORE Ways To Make Fellow Bloggers Hate You
Blog Against Abuse Day--Humor Bloggers